Lindsay Mitchell: Why the ideological attachment to state housing?

The latest MSD report measuring material hardship shows that among children aged 0-17 those in social housing have much higher hardship rates.

Rates of hardship are measured by items lacking such as a, "meal with meat, fish or chicken (or vegetarian equivalent) at least each 2nd day" or shortfalls like "could not pay an unexpected and unavoidable bill of $500 within a month without borrowing." (See p14 for full list)

But a state house tenant should have more money left over after accommodation costs due to lower income-related rents.

Many state house occupants are young. According to Kainga Ora, with around 68,000 properties:

The next graph depicts under 65s with the red bars representing greatest hardship; dark green, the least. 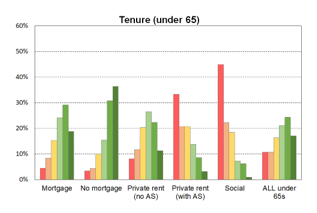 Again, the worst hardship is in social housing, followed by private rental with accommodation supplement.

If social/state housing does such a poor job of alleviating material hardship, why the continued ideological attachment to it? At least subsidised private rental housing does a slightly better job bearing in mind those percentage differences represent thousands of individuals.

From the report, one final related graph for you.
Of all the household type profiles below, which most closely resembles social/ private rent with AS? 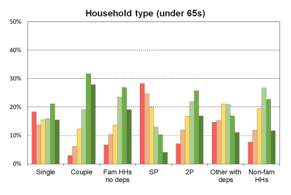 Sole parent families - many in subsidised state or private rentals - continue to harbour the greatest hardship.  Coincidentally the high incidence of these families is another result of a failed ideological fervour - the rejection of nuclear families.

Yes, the government's own stats clearly show that single-parent families in state housing have the highest levels of hardship. No surprise, I'm sure!

But the government's policy is to encourage single parents to have more kids which will increase hardship, drive up demand for more subsidised state housing and increase their benefit payments.

There appears to be an obvious relationship and yet the MSD is either oblivious to its own figures or appears to think that making the problem worse will somehow make it better!

I'm a private renter, on a benefit for health reasons, and receive accommodation supplement. The AS pays barely 50% of my actual rental. I would be much better off financially in State Housing, but as a stale, pale, 50+ white woman, my chance is NIL. And I do not want to have to live next to violent drug users and gang members. So I prefer to struggle along

It's a sad fact that welfare dependent people such as those in social housing only see more babies = more money. They cannot see the fact that more babies means more costs.
As long as single parents are coddled they take no responsibility for themselves.