New Zealanders are easily convinced of stupid things aren’t they.

The new synthetic language will never work the way they think. It will always be divisive.

It is a major plank of the spiteful Labour Green Marxist indoctrination – and some of YOU – were silly enough to vote for that last election. Maybe it would be better for your health and the health of the Nation – that next election - you stay home with your thumb in your mouth.

They (The subversive and failing Labour Green “government”) don’t seem to understand - that language is to the population like the engine is to a car. It has to run properly. It has do the job and get you to a reliable place - and enable you to ask questions and explain yourself - and people have expectations that it will work at a suitable level and be easy – and other people will understand it – or be able to decipher it - and that it will have words for everything - and that includes obscure jokes and puns.
Doing the News and weather in Maori – is a sad joke on all of us – including the majority of Maori who have no idea what they are talking about - not to mention all the people who are trying to learn English.

(Last night 23 July - on TV ONE'S PATHETICA NEWS - they did the majority of the weather in an extreme Maori/English hybrid.)

(Such behaviour on the part of a ‘public’ TV channel - can only be described as full on subversive political propaganda)(TVs one through four – are now gone from my dial.) (Mind you – they have been waning for a while now.)

Why would I watch that crap when I have hundreds of SKY channels and Netflix - and You Tube? I need TV one two three and four like I need AIDS.

People (well – the sensible ones) won't buy into this language nonsense unless it has evolved over time into a useful means of communication that can express a very wide range of things - and of course it hasn't - and is being made up on the fly by fanatical woolly headed extremists.

YES - EXTREMISTS! What else could they possibly be?

English – our mother tongue - is by far the most successful language on the planet. All Maori learn to speak it from birth - so for them it is in FACT - their mother tongue – and the never ending propaganda is seeking to make them ashamed of that.

Simply put - Maori language cannot ever succeed alongside that reality.

Recently coined “Te reo” - is the language of ideologues – pushing a political basket case that will never survive the medication – let alone the incubation period.

They themselves - will ALWAYS have no choice but to slip back to English to get the job – however subversive it happens to be – DONE!

But it is interesting to watch the lunatic idealists thrashing about and squandering of BILLIONS AND BILLIONS OF OUR TAX DOLLARS - on a fanciful idea that we all – in our heart of hearts - know will fail.

They say they hope to achieve a situation where a large section of the population become bi-lingual.

Bilingual. What is wrong with these idiots - we are already multilingual.

We (the smart ones) have to note – that most places in the world that are bi lingual – have a feed of people coming in from a nation that speaks another language. We do have that – but the languages (plural) that they all speak – are full and comprehensive languages in DAILY USE - all over the planet – and all they want to learn is ENGLISH – as fast as possible.

They don’t want to be confused by the day’s weather being done in a language that is gobbledygook to them. They aren’t stupid – they would have learned some English before the left where they came from.

Back in the day (I recall) some people I knew were pushing a made up language called “Esperanto" and that never worked either. Even at the age of eleven that was obvious to me.

Maori Language is the world's most expensive and divisive and useless social activist already failed pipe dream. Eventually our so called 'academics' and political extremists in cushy do nothing useful Govt jobs and in Media - will figure it out – but because it generates vast sums of YOUR money and attention for them – they will take much longer than the rest of us to see the light.

(They are also in an enclosed and subversive Marxist oriented social environment – so there is no hope for them – but the rest of us just need to remember – that an “academic”” is only a University Student who passed the How-to-be-strange exam.)

We ordinary people living in the real world do know – that universities are hotbeds of useless resistance to common sense – but by the time people graduate and have to get an actual job – reality begins to set in.

Lucky for us – some of them do actually learn to be engineers and doctors of things we need. Good on them - and we hope some of them are smart enough to put the political nonsense to one side.

In the mean time – I’d quite like to learn French. That's a very beautiful – grown up - and fully evolved language – with actual BILLIONS of books written in it – that millions of people actually READ! And it will be still evolving naturally - like Italian - and German and Dutch – and Swedish – etc etc - and Chinese!

Nothing natural about the 'evolution of Maori Language - it is being forced on the population all levels of education and mass media.

It absolutely fits the definition of Brainwashing - Indoctrination and Propaganda.

Chinese is spoken around me every day and I hear it and see it all the time - and it is a highly effective language – and they speak it in labs – in daily life - and on TV stations that have an audience a million times bigger than our silly TV Stations and communication industry – and indeed they speak it in space flight – whereas here – some people might speak Maori in a canoe – or on a Marae – or when they are trying to impress someone at a get nothing done government meeting. Most people have no idea what they are talking about - but wow! - Did you hear that?

Then there are a few words at the beginning of an actual English sentence on the News – and now the Weather.

Seriously? - Do these idiots have even a vague idea how many people resent that?

She just want's to improve her English - and that is where our language focus is. I am VERY proud of her.

But guess what other language the kids are taught in China:- -> ENGLISH – a language they can use ALL OVER THE WORLD – while we waste the learning time of our kids – trying to teach them a synthetic partly Stone Age language that is being made up on the fly by extremists.

C'mon Kiwis - the nation is broke - inflation is out of control - we are governed by trailer trash. - - Isn't it time we woke up from the nightmare of delusion - and got real?

And mark my words New Zealanders – there’s this other tragedy of communication running concurrent with this language travesty.

:-> A nation that rewrites its own actual history to eliminate embarrassing stuff they don’t like – and then puts the fake history they have made up in bookshops and on the shelves in schools - and teaches it to the kids - and on Children's programs on the TV and radio as well - has ZERO integrity – and like it or not – that is us.

NEW ZEALAND IS DOING THIS!

And in that regard WE - yes WE - are emulating the very worst of the worse: Because that - is what they did in German schools in the twenties and thirties and forties. 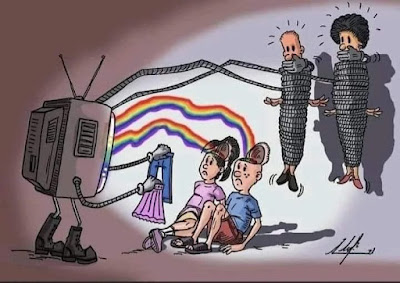 Denis Hall describes himself as an old man and an artist - a thinker - a writer - and a commentator. He does what he does - for the love of it.

I think the Māori language will get them jobs in Bondi beach .
What took you so long to realise that channel’s 1-4 are run by idiots.

Brilliant written article. And so true. I also am getting sick of those that call themselves maori, rubbish, show me a full-blooded maori and I come and shake his hand, (or rub his nose). The rest is a bunch of half-casts, at best. that think they are maori. I also know a lot of so-called maoris I have worked with and have known, lovely people, no pretense, most likely haven't got a clue what this is all about. We used to play the guitar and sing and have a lot of fun. That part has mostly gone, because of this nonsense, a large rift has been created beyond the control of the maori and the pakeha. I am a full-blooded Dutchman, blunt as they come with a lot of maori friends, live and let live! I love this article, it's about time the boot got put in and level out this nonsense. Who creates all this?, certainly not the people that work side by side everyday.

After screaming at the TV on Sat night's weather, turning it off and throwing the remote it was heartening to read your on the money opinion. But how do we stop it?

Great article and on Sunday night after the TV1 weather,listeners phoning Roman Travers on ZB talkback, were given a short shift by Travers saying maori had been here for 1200 yrs b4 us,the language was a recognised language in NZ ,and then said to one elderly women in her 80's,that if she didn't understand with what was being said she should start to learn rather than ringing up complaining.This happened 3-4 times .Travers carries on like a half wit with has pigeon english and shouting out like a clown, and has no respect for older New Zealanders,he is at the wrong broadcaster in ZB, and should be at TV1, his head dept would suit them.

Bang on Denis
Good old NZ, as usual, is at the back of the pack trying to adopt an old out-of-date language that pretty much nobody wants to use.

It was tried in Scotland with Gaelic - FAIL!
They didn't re-write their history in the process though.
It was tried in Wales with more success, but everyone there speaks English and uses it in everyday life. Apart from making some programs in Welsh which many Welsh people don't watch that's about it.

It's a fad that's being going on for a while now but we're always last cab off the rank and we should have realised how unsuccessful it's been elsewhere by now...but we are ruled by a bunch of race-driven ideologues who are impervious to sense.

My wife is also Chinese Denis and cannot comprehend how millions and millions of taxpayer's money is wasted on a language that can't be used anywhere else in the world. We have kids leaving school with no literacy, writing or math skills but spend untold hours practicing for bloody kapa haka competitions or grass basket making. It is a crime that te reo is being forced onto a population that has no interest whatsoever in stone age crap. Kiwialan.