The BBC has announced “compelling evidence” that Covid originated in the Wuhan seafood and wildlife market.

Among scientists, this announcement is causing some laughter.

There has been a great deal of prior scientific debate on this subject which has left us in limbo. Principally because the Chinese blocked the possibility of independent investigation and access to data.
Certainly, China, and incidentally, the US National Institute of Health (NIH), have a high interest in repressing any conclusion that Covid originated in the Wuhan Institute of Virology and Infectious Diseases (WIV) which is adjacent to the Wuhan wet market.

After all, WIV was definitely doing recombinant DNA gain of function research on coronaviruses jointly funded by NIH and the Chinese government. If you want it spelled out with two barrells go here.

The BBC article regaled us with a chart of supposed early cases of Covid clustered around the wet market. The first problem with the BBC picture is that the locations of WIV were not shown. They are adjacent and close to the wet market, as Igor Chudov has illustrated (we have added them in RED). 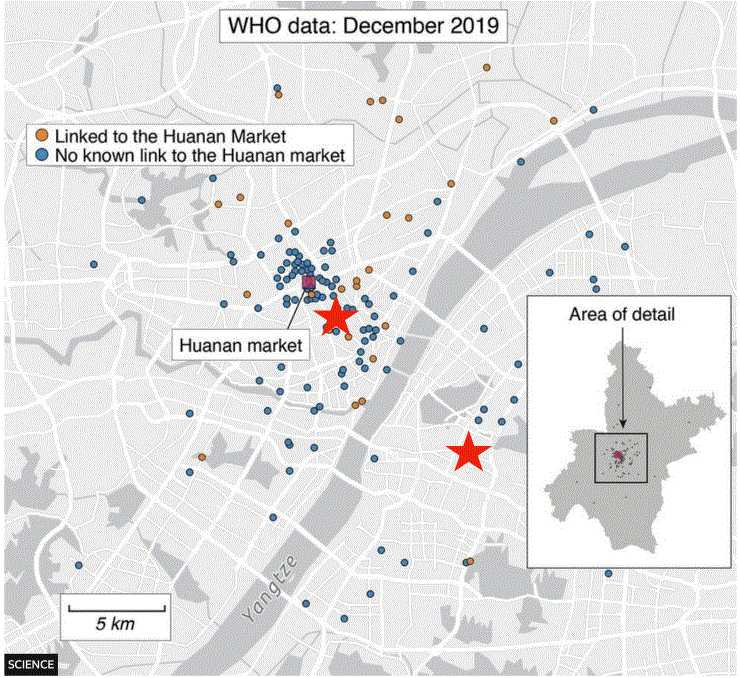 Secondly the actual number, location, and date of early cases is a matter of considerable dispute. The WHO data used in the paper quoted by the BBC was supplied by Chinese authorities and has not been independently verifiable. Weibo data also quoted in the paper is from a later date.

But even if we accept the highly unlikely proposition that the official Chinese data is complete, accurate, and untainted by the authorities, the third problem is that the blue dots (the majority) are cases that have no known connection to the wet market.

Until now, location and origin ambiguity has been a telling argument to question any conclusion that Covid-19 came from the wet market (not to speak of the fact that no species carrying a coronavirus with a genetic makeup sufficiently similar to Covid-19 has been found in Wuhan or nearby or far away for that matter.)

The BBC announced that this problem had been solved by a second paper which suggests that the virus jumped from some unknown animal via an intermediate host (possibly Racoons, quaint furry creatures who sometimes catch a cold) in the SE corner of the market to humans not once but twice at two different times involving two different variants of Covid.

Although animals harbour a great many viruses which could potentially spill over into human populations, the crossover of new types such as Marburg disease or Ebola is a comparatively rare event and in most cases the host animal is identified relatively quickly. This is not the case with Covid-19.

Therefore the suggestion that two distinct variants spilled over in roughly the same place within a short time span from an unidentified animal could be classified as an “ad hoc” suggestion designed to patch up a failing theory.

There are other explanations for the possible early appearance of two phylogenetically related variants of Covid-19 discussed in the second paper referenced by the BBC.

For example some credible accounts have pointed to a laboratory escape (or deliberate release) earlier than November 2019 leaving sufficient time for the highly unstable Covid-19 to mutate.

We are in a period of what has been termed revolutionary science by Thomas Kuhn in his famous book The Structure of Scientific Revolutions.

During periods of uncertainty, scientists from opposing camps fight it out in the journals based on experiments and competing theoretical models.

For example the concept of the ether, an invisible substance which pervaded space, was eventually rejected as a result of Einstein’s theory of relativity and its experimental confirmation, but not before reams of ingenious counter arguments were published by scientists anxious to retain the ether concept.

Much the same occurred to defend the notion that space was made of crystal, until Gallielo saw through his telescope the moons of Jupiter travelling freely through the supposedly solid crystalline structure of space.

It is quite legitimate for the authors of the two papers cited by the BBC to publish their observations and speculations about Covid-19 origins. That is a normal process in science. When facts and conclusions are in dispute there is usually a flurry of publishing presenting arguments and counter arguments.

But why did the BBC and their science correspondent Victoria Gill choose to present them to the public as compelling evidence which should end the debate, but omit to depict the location of WIV or discuss the counter arguments?

It is an interesting mystery, but one I think, dear readers, you might be able to solve quite readily. I leave it to you.
Incomprehensible Pronouncements in the Course of a Scientific Revolution

Which brings me to another case of incomprehensible pronouncements in the course of a scientific revolution. Our Director General of Health, Dr. Ashley Bloomfield, is retiring from the field of battle.

Dr. Bloomfield has been an unremitting proponent of mRNA vaccination and a person who has gone further even than Pfizer in establishing strict criteria to deny exemptions.

Dr. Bloomfield’s final message to New Zealand was a bombshell:

“To better track the risk factors of dying from covid-19 we’ve done some preliminary analysis….It shows convincingly, here in Aotearoa, that getting boosted is one of the most important things you can do to reduce your risk of death from Covid-19. Very consistent with the international evidence. Across the population, people not fully vaccinated against Covid-19, that is; they’ve had less than 2 doses, are 6 times more likely to die if they catch covid-19, compared with someone who has had at least one booster dose. That’s once you adjust for all other factors [my emphasis]. Now, for people under sixty, this risk [of dying if you catch covid-19] is even higher; more than 13 times greater for those who are unvaccinated or less than two doses.”

The key phrase here is ‘once you adjust for all the other factors’.

Dr. Bloomfield didn’t let on what this adjustment involved.
The Boosted Currently Have the Highest Rate of Death

We have been tracking the official daily Covid death toll for months, and it is absolutely clear that the boosted currently have the highest rate of death per 100,000 within 28 days of testing positive for Covid.

This is contrary to what Dr. Bloomfield asserted and much higher than the unvaccinated and the double jabbed. Yet he managed to spin the officially higher mortality among the boosted into a giant health advantage for them by a factor of 6 compared to the unvaccinated population, and 13 (???) for the under 60s. This is not credible and cannot be reasonably asserted without explanation.

We note that the Ministry of Health has exempted its employees under 30 years of age from receiving boosters because of the high rate of adverse reactions in this age group. So what is going on here? Are boosters safe?

The Ministry of Health has decided somehow, without telling us how, that a great many boosted people are not dying ‘because of Covid’, but merely ‘with Covid’.

Hence they have been excluded from the statistics of Covid deaths. You and I can’t really dispute this, because Dr. Bloomfield didn’t give any details of how his gerrymandering Ministry of Health backroom boys have done this.

I did just receive a response to a similar question asked of the Minister of Health Andrew Little a few weeks ago—the minister has noted my concerns and forwarded my correspondence to the Ministry of Health. So he also didn’t say what the boosted are dying of.
New Zealand Has the Highest Rate of Excess All Cause Mortality in the World

One World Data reported last week New Zealand has the highest rate of excess all cause mortality in the world, but the Minister either doesn’t know or doesn’t want anyone to know why.

And just in case we might find out, Dr. Bloomfield has conveniently doctored the data.

Fortunately for us sleuths, the already announced official historical count of deaths cannot be easily altered—the boosted have a higher rate of death than the double jabbed and the unvaccinated. So what are they dying of?

Might I suggest Dr. Watson (sorry, Bloomfield) that the only thing that distinguishes the boosted group from any other group by definition is that they have received more mRNA jabs.

It isn’t a very big step to the conclusion that the boosted must be dying at a greater rate, not because of Covid, but because they are vaccinated.


BOOSTERS ARE NOT SAFE, THEY ARE KILLING US.

As Dr. Bloomfield has resigned from his job and leaves us today for an unknown destination, we may never be able to ask him how he adjusts the data.

We may never be able to ask him why he refused to grant mRNA vaccine exemptions to people injured by the first shot.

We may never be able to ask him why he thinks overseas Covid-19 data points ‘convincingly’ to the safety and efficacy of mRNA vaccination, but we do know there are very few if any, credible independent researchers left who agree with him.

Through countless Covid-19 press conferences, Dr. Bloomfield has been rolled out as one source of truth for the NZ public, fully endorsed by Jacinda Ardern. He has left us with a message that will seriously harm many more people unless its is corrected.

Dr. Bloomfield has sought yet again to inflame the public against the run of facts and against the unvaccinated. Just step out from under his shadow and peruse the pages of a published scientific article such as this one.

If you do, you might feel the need to treat Dr. Bloomfield’s recurring advice to get boosted again and again with a great deal of caution. Naked authority by itself does not amount to truth.
Dr Guy Hatchard is a former senior manager at Genetic ID, food testing and certification company. This article was first published HERE

Maybe Dr Ghastly Doomshield has gone to work for Pfizer...as Director of Sales and Marketing!

I'm sure he'll be on a bonus linked to the number of boosters he can sell.