Lindsay Mitchell: Benefit incomes - why it's not worth working

MSD have released a report on benefit incomes. I have long held that beneficiary advocates base their poverty pleading on the basic benefit rate, but those numbers are well under total incomes once the additional top-ups are included. Here is a selection of the graphs from the report: 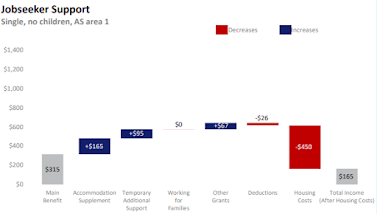 In this calculation $450 is nominated for a single person's accommodation costs in a high rental area. This reflects a one-bedroom apartment in Auckland perhaps but even then, the sum is quite generous. All of the young people I know share flats and houses. And they have jobs. Most try and keep their accommodation costs below $200 per week. The example is very odd.

The next example shows a couple with two children. The nominated rent in this one seems reasonable: 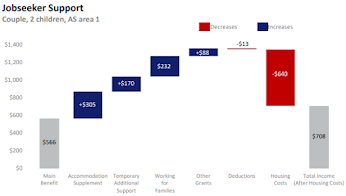 Below are actual average incomes by family type before and after housing costs: 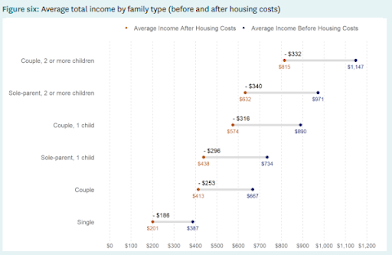 Averages reflect a range of living costs around the country.

It is immediately obvious that one working parent - let's say the father earning around $60,000 - can only support his family as well as income from a benefit.

For example a father working in construction, education, and automotive on the median salary.

If he worked in customer services, transport and logistics, or hospitality and tourism he'd be worse off.

And we wonder why there is a labour shortage.

I am out of time but go look at the report, especially the section on inflation. (Don't be tripped up by the 'equivalisation' process.)

Afterthought: It occurs to me that the government is going to start pushing this line hard - that they've looked after families with children on benefits but now single people are falling behind. The report nominates an unrealistically large rent in the single person example to leave a small after-housing costs income. Why?

Because they are gearing up to push the unemployment insurance scheme on New Zealand whether it is warranted or wanted.
Lindsay Mitchell is a welfare commentator who blogs HERE.

Benefits should only be available to superannuitants, who have worked hard all their lives and sickness beneficiaries. Also people who are going through a bit of a "bad patch".

Benefits have become a normalised part of society. They shouldn't be. No one has come up with a good reason that benefits actually "benefit" anybody.

I you actually think about the wider implications of this, you can only conclude that if able-bodied people were more or less "forced to work", they might achieve higher levels of self-esteem and greatly benefit society as a whole.

Many low income workers who trouble to work would be unaware of these comparisons. But the widely connected social networks of many of the Beneficiary classes ensures that it all common knowledge, and exploited accordingly. The workers are mugs, especially as fancy new state units in (to date) good areas are now provided for accommodation. Little wonder many do not strive in education; they would likely compromise their future welfare qualification.

As an older teenager supporting my girlfriend and our baby a long time ago I once lost a job. I successfully applied for an unemployment benefit which was all easy back then, but before I received any payments from it I had found a new job. I thought at the time that a good system would have been to be given quickly a reasonable weekly amount so the rent and basics could be maintained without great trauma such as eviction, but for that amount to be very temporary, reducing rapidly after some weeks or perhaps a few months. Knowing that the benefit income would be progressively cut after a specified time, the beneficiary would be motivated to find new work before the cuts transpired. If 'proper' jobs are unavailable, the beneficiary at least has some time to change circumstances to reduce outgoings and perhaps establish a few local lawn mowing jobs or similar to stay afloat. Only those incapable due to significant disability would be able to extend the duration of their benefit. Many decades later I still think that would be a better system. Initialy don't be stingy or put impediments such as stand-downs in place but encourage personal responsibility by strictly time-limiting unemployment benefits and perhaps limiting the frequency with which such benefits can be applied for.