Jacinda Ardern famously stated that if you were vaccinated and boosted, “You won’t get sick, and you won’t die.” She also said that Covid was a disease of the unvaccinated and the virus was literally hunting them down. But the latest figures from the Ministry of Health show that neither of those statements was even remotely true, and that 70 per cent of all Covid deaths are people who were boosted. 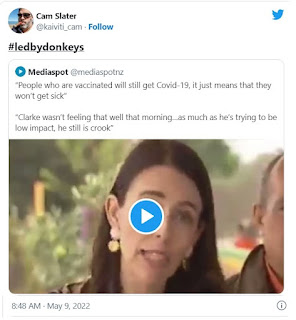 Click to view
“Safe and effective,” she said, again and again. I wonder how many of those dead thought about what she said as they lay dying.
I wonder if it is called a booster because it boosts your chances of dying.

What angers me is that none of this should have been a surprise to anyone had our politicians and our media even bothered to watch and report what is happening around the world.

New Zealand has been a laggard right the way through this whole episode. Now we are playing catch-up and the future does not look at all positive.

Undertakers are experiencing a rush of business with Australians dying in abnormally high numbers in a ‘worrying’ trend doctors can’t explain.

Martin Masson, who is managing director of Tribute Funeral Services in the western Melbourne suburb of Ravenhall, said there is no shortage of work for him and others in the industry as official figures confirm Aussies are dying at a higher rate in 2022.

“We have certainly seen an increase in the need for our services as have done a lot of other directors.”

Mr Masson believed more working age Australians are dying but doesn’t have specific statistics to back this.

“We certainly have seen a distinct shift back to people in their 60s, 50s and even late or mid 40s and even younger,” he said.

Gee, what did we do differently for the past two years? Could it be…? Maybe the ‘experts’ will know?

The Australian Bureau of Statistics (ABS) confirms Australians have been dying at rate higher than normal this year.

When mortality rates climb above historical averages, without being explicable by having an ageing population, they are termed ‘excess deaths’.

“There has been excess mortality recorded in 2022 across all months, with both the number of deaths and the rate of death generally higher than historical averages,” an ABS spokesperson told Daily Mail Australia.

Covid was a substantial proportion of those deaths with 862 deaths “directly attributable to the virus in May”.

However, there were also more than the expected number of deaths from dementia, diabetes and ischaemic heart diseases.

It’s like they are all putting their fingers in their ears and screaming lalalala…no idea what is causing this.

Peak doctors’ body the Australian Medical Association (AMA) told Daily Mail Australia it was ‘worrying’ that deaths are climbing and it reflected what is being seen overseas.

“We have seen the ABS statistics that mirror a worrying trend in other countries like the UK,” AMA President Professor Steve Robson said.

Britain has seen a 10 per cent increase above what would be the expected number of deaths since April.

The main causes have been cited as circulatory diseases and diabetes.

Prof Robson said it was unclear what was driving the excess deaths in Australia.

“There needs to be some research into why this is happening,” he said.

You’d think they’d realise that the ONLY thing different from previous years was the mass injection of people with what is increasingly looking like a dreadful and often fatal unproven medicine.

It’s like these dolts have forgotten what Occam’s Razor is.

New Zealanders will start to realise this soon too. It’s coming, as sure as night follows day. By the middle of next year we too will have excess deaths increasing alarmingly.

Then the blame game will start. It will be brutal and it will be harsh. Labour will get pasted and National should too. I’m especially looking at Chris “Get Boosted” Bishop. I’ve saved all his tweets and next year I will remind him that he is just as culpable for the carnage that vaccines have caused.

No wonder ‘experts’ are quietly resigning and shuffling off to retirement. Politicians are far more shameless and infected with astonishing narcissism: they won’t quit, they’ll have to be dragged from office.

We absolutely must have a Royal Commission of Inquiry into the Labour Government’s $60 billion Covid response and action. Only then can we begin to understand how 92% of the population lost their minds and allowed the other 8% to be treated like they were worse than child rapists.
Cam Slater is a New Zealand-based blogger, best known for his role in Dirty Politics and publishing the Whale Oil Beef Hooked blog, which operated from 2005 until it closed in 2019. This article was first published HERE

not a big fan of mandated vaccines, but shouldn't the analysis be based on deaths as a % of the population (vaccinated vs unvaccinated) instead of absolute numbers?

This is good and all very well BUT your table should include unvacinated deaths too.
There's no point showing this to someone vaccinated.
And it would be much better for all of us if you do this pleasecit could save lives. Thank

Cam is correct, while 53% of total population is boosted, they represent 70% of total covid deaths. Also Double-jabbed and boosted together represent 86% of deaths. In regards to unvaccinated, the MoH lumps them with those who died after their first jab or within 1-2 weeks of their second jab and under-12s, under the label of "not fully vaccinated". In spite of this grave cover-up (ie including those who died after 1st or 2nd jab), while this group represents 22% of population, they compromise only 13% of deaths. Farah Hancock was publishing the proportion of population based on vax status and corresponding proportion of deaths and hospitalisations on her webpage till early July. https://www.rnz.co.nz/news/in-depth/450874/covid-19-data-visualisations-nz-in-numbers
The numbers, all based on official MoH data showed that boosted and double jabbed were over-represented in death and hospitalization, while unvaxxed were under-represented, clearly proving that the jabs were pushing the deaths and hospitalisations, with boosted having the worst statistics. MoH instead of stopping boosting immediately (based on the fact that while boosted were around double of those double-jabbed, they were 4-5 times more likely to end up in hospital or dead), simply removed the offending charts from Hancock's webpage. So, at least from July 7th they knew they were causing more harm by their jabs, esp. boosters, but decided to continue. These data are still there and database of death/hospitalisation can be compared with database of jab dates to prove the number of deaths and hospitalisations after each jab. A crime was committed and there is evidence for it. Now, you can see why they went to such a length to persecute unvaccinated, because they were the "control" group proving jabs are neither safe nor effective! Thank you Cam for speaking up. MSM not only are not doing their job and are not asking questions about the elephant in the room, i.e. the number of deaths among boosted, but also are aiding in this crime, by silencing those who highlight MoH data!

NZ had a guy shot by cops. Killed him. Then postmortem they gave him a covid test( a dead person) came back positive.
He was put down as a covid death. How many more have been falsely branded.