The latest Mood of the Boardroom has been released by the NZ Herald, and that mood can only really be described as surly. Jacinda Ardern has plummeted in the rankings and one of those surveyed says the Government’s actions during Covid were making “a mockery of kindness”.

While the country’s borders are now open again and Covid restrictions diminished, the Government’s response rankles.

“The Prime Minister should commence a Royal Commission of Inquiry into her Government’s Covid response,” said independent director Craig Stobo. “Her politicisation of health policy by separating New Zealanders, incarcerating New Zealanders in their houses or in MIQ, locking up cities and regions, and discriminating against workers and vilifying New Zealanders who lawfully protest makes a mockery of kindness.”

Craig Stobo is spot on with his comments, and you know he is spot on because pannier bag and lamb chop recipe aficionado Russell Brown is outraged. 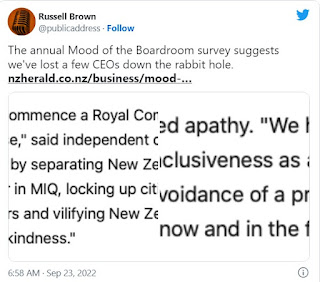 And I suspect many of those surveyed by the Mood of the Boardroom agree.

Labour’s top two ministers have taken a pummelling in the Herald’s Mood of the Boardroom survey out today.

Robertson, who has been replaced as top Cabinet performer this year by Climate Change Minister James Shaw, scored 2.98/5, down from 4.18 in 2020 when he scored well for his initial fiscal management of Covid.

More than 100 CEOs and directors participated in the survey, which also canvases economic conditions and business confidence. The rankings for ministers are based on a scale where 1 equals “not impressive” and 5 equals “very impressive”.

Ardern is under half! That shows you just how much trouble this Labour Government is in, when their star performer is hopelessly out of touch with the reality of the situation she finds herself in.

While Ardern scored well on things like leveraging her personal brand for NZ businesses internationally, she was marked down in areas such as child poverty reduction, delivery of transformative change and building confidence with the business community.

Ardern is the minister responsible for child poverty reduction, and on that front she is an abject failure.

“Delivering impactful and positive change is much harder than aspiring to do so”, said Deloitte chairman Thomas Pippos.

“There is a lack of direction and sure-footed policy to combat the failings around health, education, housing and crime. Stop the political posturing and interference. Focus on the core fundamentals and then get out of the way.”

This Government is big on slogans but lacks even modest delivery on the promise of those slogans. They are focusing on delivering on areas on which no one wants the focus of government. Especially co-governance:

CEOs were divided on the issue of increased co-governance.

About 37 per cent of survey respondents said that increased co-governance between Government and Maori was “right for the times”, although many included caveats in their support.

“Co-governance seems a sensible solution for resolving claims in relation to taonga/property — especially where only a 21st-century solution is possible,” says New Zealand Initiative chair Roger Partridge. “However, co-governance of the national provision of services is not consistent with the principles of our liberal democracy.”

Look at the weasel words from the NZ Herald: “CEOs were divided on the issue of increased co-governance.”

Just 37% supported increased co-governance, and even then with riders and qualifications, meaning that 63% or a massive majority of those surveyed were against it. They weren’t really divided, were they? That’s just intellectually and deliberately dishonest from the NZ Herald. Then again, they can’t be too harsh on their paymasters, can they?

When the latest Edelman Trust Barometer says workers believe their bosses more than politicians or media then you can see the real problems for this increasingly unpopular government.

No wonder the NZ Herald ran the headline “Worst Government since Muldoon”.

You know you're down the crapper when the top-ranked Cabinet Minister is James Shaw!!!!

He who managed to get himself re-elected as Greens Leader, after 30% of them wanted him out, in a close-run contest against nobody else.

What does that say about our elite Business Leaders though when they think James is doing a sterling job on Climate Change - they're ALL woke, just like ex-corporates Luxon, Willis et al.

I find it interesting that the PM can stand in the main hall of the UN and verbally decry their actions over Ukraine. To show Her strength in support of those comments, she should expel the current Russian Ambassador, recall ours in Moscow (waste of time being there anyway) -this has been suggested, BUT no,
this would interfere with Her agenda of "kindness" and appeasement toward Russia, and lower her status with the Socialist Cabell across the World.
It is because of "this weak kneed" approach to International Affairs (same with the current Minister of Foreign Affairs), that is/has led New Zealander's to question Her ability to Govern. Even from Business.