Cam Slater: It’s Ok When the Left Does It

Remember when the left thought chucking lamingtons at politicians was funny? I do.

Grant Robertson has decided to hold a pity party over the amount of abuse Labour politicians are copping when they dare to saunter arrogantly outside of the Wellington Beltway. He has complained that some protestors called him mean things and one had a lamington that may or may not possibly have been used as a projectile. He’s upset about it but forgets when the left did similar things. Apparently, it’s ok when the left does it.

The deputy Prime Minister has revealed he needed to engage security detail usually only reserved for the Prime Minister to attend a public meeting recently.

The abuse and vitriol from a small sector of the public’s got so intense Labour’s considering axing its iconic public walkabouts on next year’s election campaign.

Back in 2020, there was peak Jacindamania. A hyped-up electorate could not get enough, with Jacinda Ardern swamped by crowds during walkabouts.

But next year will not be the same.

“We are going to have to think about this election campaign in a slightly different way,” Grant Robertson said on Tuesday.

That’s because, peaking at the parliamentary protest, politicians are increasingly the target of abuse and threats.

Recently, the deputy Prime Minister took the unusual step of taking the Prime Minister’s security detail – the DPS – with him to an event in Northland where protestors prepared with lamingtons disrupted Robertson’s meetings. They followed him to a hotel and even blockaded the airport.

Newshub understands Robertson needed to be driven onto the tarmac and board directly from there.

“They were screaming and yelling at me that I was a paedophile and various other revolting things,” said Robertson. “Those experiences are not great and DPS were there to protect me but they can’t possibly be there to protect all politicians.”

Poor Robbo, he hasn’t managed to work out that when you pit mate against mate, family against family and destroy people’s jobs, careers, livelihoods, businesses and relationships through draconian mandates that created a two-tier society, that just maybe some people feel a bit aggrieved about that. 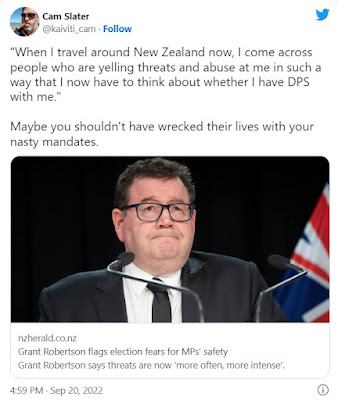 Click to view
Perhaps he might like to reflect that being a part of the most divisive government in living memory, where mandates created an us and them situation and race-based policies where they’ve invented co-governance and decided to create essentially an apartheid state in New Zealand, all without a skerrick of consensus or consultation, might also make people just a tad angry.
Or the fact that when a very large group of people brought those grievances to the Parliament that the politicians totally ignored them, and worse, the regime sent in the Police to crack skulls, might also make people realise that politicians truly are the elites who refuse to listen so they may as well chuck lamingtons at them.
John Boscawen
And that’s the thing, isn’t it? The politicians appear to think they are special, and the dirty proles need to realise that. They are there to rule, and you will do what you are told.
Grant Robertson should be thankful that Kiwis are so laid back that a lamington is considered an egregious act of violence that MPs need protection from.
Of course, Grant Robertson forgets when the left thought biffing lamingtons at politicians was funny. ACT candidate John Boscawen had a lamington dumped on top of his head by a left candidate in the Mt Albert by-election, and my how the left laughed. 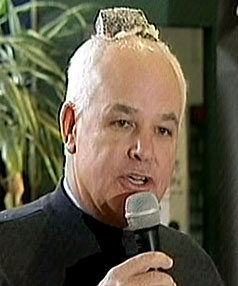 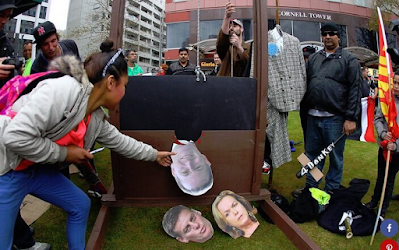 Protestors guillotine an effigy of Prime Minister John Key as the heads of deputy Prime Minister Bill English and Minister of Justice Judith Collins lie on the grass during the National Day For Action called by Aotearoa Is Not For Sale at Britomart on July 14, 2012 in Auckland, New Zealand.
So, in Grant Robertson’s eyes, and the media’s eyes, the story is about him being abused, and not about why he is being abused. He thinks he can ruin countless people’s lives and everyone is supposed to be polite about it.
In any case, the lamington was in far more danger from Grant Robertson than he was in danger from a flying lamington. Looking at Grant Robertson he certainly doesn’t appear to have dodged too many lamingtons or pies. No doubt he thinks people yelling, “Eat a salad” would be scary too.
And to heap more misery on top of the lamington outrage, I’ll chuck his own arguments that were used to ignore people suffering under mandates right back at him.
He’s learning that his choices, too, have consequences. Like his choice to belong to a Government which discriminated against its own people. Like his choice to belong to a Government committing crimes against humanity, injecting an unproven jab into our kids – you’re damn right we’re angry.
They are the first government to be widely hated by a majority of New Zealanders. Due to their myopic push for nasty policies that negatively impacted ordinary people’s lives they forgot that this is a tiny country, and political careers are finite. And citizens are everywhere.
Add to that the refusal, time and again, to understand, listen and govern according to our wishes, not theirs. The fortified walls of the Cabinet Room have shielded them for all these years, now they must face reality. Poor them.
This election they won’t be able to infest shopping centres without being harangued by people who have had a gutsful of them. They better get used to it. If they only get lamingtons chucked at them they should be thankful for small mercies.
Cam Slater is a New Zealand-based blogger, best known for his role in Dirty Politics and publishing the Whale Oil Beef Hooked blog, which operated from 2005 until it closed in 2019. This article was first published HERE

Well written Cam. And what do we hear lamington man saying to the ram-raided business owners of our country?
Apparently they can only tap into the security upgrade funding if they have already been attacked. In the meantime they truly live in fear.
I enjoyed this article so much I will read it again.
MC

I think there are factions which foster violence to effectively threaten politicians that if they do not meet maori demands and/or ever do anything constructive like dialling back Treaty reinterpretation, the associated mayhem will make th Musket Wars look like picnics.

Yes I surprise myself by the vehemence of my hatred for this government - I a lifetime Labour supporter. I think it's because they look and sound so sincere and benevolent while they perpetrate downright fraud (I've just looked up 'whited sepulchre') Incompetence is one thing - and they are, but to persevere with policies for which they know well they do not have a mandate, and to force people's compliance to undemocratic behaviour is completely unacceptable. I so look forward to their rout, but it can't come soon enough.

The only thing that is protecting this disastrous government is the MSM that’s in this governments pocket.

In my mind he's just identified himself as a complete wimp. I thought he was made of sterner stuff. Really, if he's this desperate to play the victim and has this level of self-concern he is in the wrong line of work.

It's a shame that Robertson has shown his fragility in the same week as the other supposedly competent minister, Chris Hipkins, threw another innocent person under a bus to save his own skin. This time it was Bill English, to distract from the Mahuta scandal. Just like Charlotte Bellis and the Northland "sex workers", Hipkins' response to danger is to grab a human shield to use while he escapes to safety.

This is just serving to illustrate how thin the Labour bench is. When Comrade Ardern goes after they lose the next election there is no-one with the skills or personality to take over. They are going to be a long time in opposition.

Which is fine with me, but it means the National Party can be lazy and risk-averse when we really need them to step up, confront the issues head-on and lead the country in a new direction.