Have a look at the photo that Justin Trudeau posted of his trip with our PM via his private jet from London to New York.

If you haven't seen it, it's a side on of the two great leaders across the sort of table you get in a private jet. 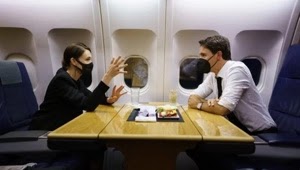 Perhaps, unusually, both are wearing masks. Given the pandemic is over according to Joe Biden who said you don’t see masks anywhere these days, so he clearly hasn’t been flying Air Justin.

The irony is the feedback on the post. No one sees the masks as anything other than a stunt. They call it "mask theatre."

Many pointing out that it was the same Trudeau on Saturday night London time mid-lobby possibly drunk, singing his heart out without a mask in sight

So no mask for the sing-a-long, but by the time they clamber on board the private jet, he needs to be virtually alone in a room with one other and a photographer complete with Covid protection.

His post tells us what he talked about. They reflected on the Queen, he doesn't mention the karaoke. But then he does mention how they talked about climate change and the need to do more and better to save the planet.

I kid you not.

He is on his own private jet, having been asked not to fly privately to the funeral.

He has a climate warrior sitting opposite, one of the south Pacific's most vociferous climate warriors, drumming up dreams and plans of a clean environment for our kids and their kids. All at the same time laying down about as bad a carbon footprint as you can possibly achieve all by one's self.

The word hypocrite not only comes to mind. It is splashed across the post by the vast majority of those who weighed in probably as gobsmacked as me.

Somehow, as they sat there getting photographed together in the worst polluting form of modern transport going, they at no point joined enough dots to work out that what they were doing, what they looked like, what their track record states, and yet what their actions portray. It's the height or arrogance, hypocrisy, and an extraordinary talent at being tone bloody deaf.

I haven't even got around to the spread laid out in front of them. Yesterday, I joked about the champagne. I shouldn’t have.

Along with the tray of first class, private jet type food are, of course, the glasses of something nice. Could be cocktails, could be Evian, who knows?

What I do know is champagne socialists are insufferable. Asking us to do as they say, but clearly not as they do.
Mike Hosking is a New Zealand television and radio broadcaster. He currently hosts The Mike Hosking Breakfast show on NewstalkZB on weekday mornings.

Hypocrits never seem to see how to join the dots.

Most humans are hypocrits but the climate/covid/culture hypocrits fail everytime, it is in their narcissistic, totalitarian nature.

Well said Mike,
Typical of the wealthy elite who lecture us mortals on how we must change our ways to "save the planet" (!!!!)
Reminds me of Prince Harry, who after giving a barefoot lecture at the 2019 Sicily World leaders meeting, took four private jets over 11 days to get home to catch up with his friend Elton John.
That's' many kilograms of CO2 Harry - but I guess that's okay, because - like most glitterati - the rules don't apply you, only to us proles !!

It’s because they know the climate emergency simply doesn’t exist. Instead it’s an excuse to create a new industry and market- the blue economy - new cars , whole new businesses. It’s the perfect fictitious concept to generate growth. And if climate were really an issue we’d be talking about stepping back from buying so much stuff ( new ev cars included )…. But no- the root cause of most of issues are things like Xmas consumerism, endless new models of cars…. And the climate emergency simple creeates a massive new opportunity for new goods and services. Genius.

The two worst mandate/lockdown advocates in the 'free' world.
In awe of each other. How nauseating.

To this, I add the following (fact based) summary of the climate "crisis" scam:-
How nice for the affluent, latte sipping suburban vegans, who can afford to buy a (subsidised) Tesla. So they can swan around, "saving the planet (!)" while ordinary Kiwis are paying more for petrol. BTW - James Shaw - there is no climate crisis. New Zealand's total emissions are only 0.17% of total human global CO2 emissions. So nothing NZ does can have real effect upon climate.
Get Real, Jimmy boy !!!

The IPCC is consistently wrong in it's predictions of doom.
None of their predictions have come true:-

1/ No 50 million climate refugees by 2010, as they forecast in 2005.
2/ No increase in rate of sea level rising.
3/ Artic Ice is still there, and not melting away
3/ Antarctic Ice is actually growing.
4/ Extreme weather events, world-wide are NOT increasing.
5/ Forest fires, world-wide, are not increasing.
6/ Yes - the planet is slowly warming, in fits and starts, as it emerges from the Little Ice Age of 300 years ago, when the river Thames and the English Channel froze over.

Added to this, the increase in CO2 levels from 280 to 400 ppm, is a major benefit to the world, because (food) crops are more productive, and previous arid areas in the world are greening up.

It is worth pointing out that for most of the 500 million years or so of planet Earth' history, CO2 levels have been between 2000 and 7000 parts per million. Our current levels are literally CO2 starvation.
If CO2 levels drop below 160 ppm, all plants stop growing, and die. Which means ALL LIFE on Earth dies.

Ladies and gentlemen, welcome to the treachery express.

The not so pleasant optics of all this is how NZ looks on the World stage, a bunch of bludgers. Jacinda “ give us a lift “ Ardern. Stuck on the side of the road , with the thumb out because NZ doesn’t have a reliable aircraft to get from A to B. NZ bludging off Australia and others for failing to spend enough on defence but always seems to have enough for pet projects and paying the UN bills. Total Hypocrisy!
Next time the PM and hangers on go overseas let’s do it properly.
A sad hound dog face, well practiced, a stick with red dotted hankie over the shoulder. Really look the part, no point to put out to the World that we are a progressive, enlightened Government when the reality is we are on the bones of our arses, poor!