Darroch Ball: Youth Crime and Manipulation of the Stats

There have been comments from the Minister of Justice, and repeated in the media, about the recent youth crime wave being a so called ‘spike’. What they want is to create a message that it is ‘short term’, ‘fixable’, and ‘unexpected’. All of which are not true.

They say there has been a ‘spike’ in gang tensions, in youth crime, in ram raids, in violence, and in shootings. Don’t for one second think this is true. Moreover, don’t think this trend in the increase in all of these things hasn’t been totally predicted or forewarned. This is not a ‘spike’. It is the beginning of a new upward trend.
You can mark these words – it will become patently clear within six or so months that this increase in lawlessness in our country, in particular youth crime, is just going to continue to increase and become out of control. It will continue to increase because the current government genuinely believe that their current ideology works and they will continue down this track to the detriment of our people, businesses and our communities.

The biggest problem we are having with Labour and their left-wing cheerleaders is that they think the justice system is bad, that accountability is bad, that punishment and justice is bad. They truly believe that the way out of this so-called ‘spike’ is to take it easy on the youth and everything will magically be ok.

Don’t get me wrong, there is nothing wrong with focusing on rehabilitation, or second chances or on attending to the root causes of youth crime. But the problem of crime in our country is not binary. What the current government wants to do is drop all forms of punishment and accountability, avoid prosecution and instead give ‘wrap around support’. Whatever that means.

To highlight the real issues we have here, like I have said many many times before, the government are hiding behind some meaningless statistics and pretending that everything is ok.

“Numbers and rates from 2015/16 to 2018/19 should be interpreted with caution…updates primarily affected non-court actions against youth. Additionally, in late 2018 a change was made to how Youth offending is recorded in Police systems.”

That all means the police are the gatekeepers to youth court – if they don’t prosecute, they don’t get counted. Even if police give them warnings or alternate action, they still wont get counted as a number in the youth crime statistics.

Add to all of this, the fact that when the report records “youth offending” it also notes in the fine print that a youth offender who counts towards the “offending rates” could offend multiple times but will only ever be counted once.

It is fully bizarre how some media outlets cannot understand that the stats showing a ‘drop in youth entering court’ is not the same as a ‘drop in youth crime – even when they write it themselves: 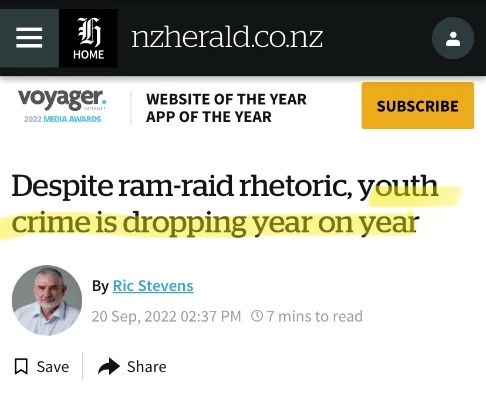 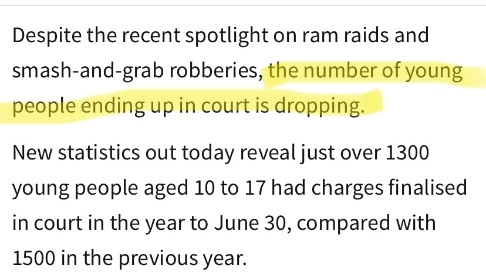 This is why this increase in youth crime is not just a ‘spike’: it will continue to increase until someone realises the system is broken.
Former NZ First MP Darroch Ball was elected to the New Zealand parliament at the 2014 general election, is currently co-leader and spokesperson for the Sensible Sentencing Trust. This article was published HERE

Yes Darroch - and -
At the same time as we are being deceived about the rate of youth crime, we have the damnation of children's services, and the fantasy that all these children need is to be returned to their communities where they will get all the love and support, they need????
As a former social worker who, admittedly, did not work in Youth Justice, I am pretty sure the recent hearings about abuse in YJ Institutions were vastly exaggerated. I do not deny that there were perverted people who abused the inmates, and who, I fervently hope, will rot in hell for eternity. NO excuse! I also think that there were (and still are) decent role models, food, beds and clothing and some respite from 'the loving supportive community' whence they came. There is no way that young boys from moral, loving, parented homes will be out ram-raiding, social media notwithstanding.
As with so many areas with this government, children too are being sacrificed to ideology.

UE expectations have watered down the competency in math&stat to 10 credits at ncea level 1. this means a uni grad could have 0 knowledge of stats. how do you expect them to understand the concept of spike, trend or anything else?

I'll say it till the cows come home - IT STARTS IN THE HOME! Have dysfunctional, typically one parent, families, you end up more often
than not with dysfunctional kids who grow up and the cycle then repeats. Just how many generations of beneficiaries do we need to see? We need to stop incentivising breeding beyond replacement and start incentivising parents to get their kids to school. That would be a good start. Going soft with 'wrap around services' sounds wonderful, but it won't work with the amount of resources they will throw at it. What's needed is a paradigm shift back to the basics. Functional families with employment being the principle income, personal responsibility and appropriate role models. Simply, the culture of too many is corrupt and broken, but then this Government is hardly a great role model, is it?