Cam Slater: Government Spending More than RNZ and TVNZ Are Worth

Melissa Lee asked a good question in Parliament about the more than $300 million spending on the merger of Radio New Zealand and TVNZ. It turns out that the Government is planning on spending more on the merger than the combined value of what both companies are worth.

Worse still, Willie Jackson just doesn’t care, and is hell-bent on ramming the merger through because it is not about money, he says, rather it is about controlling the narrative and messaging as they seek to exert even more state control over media in New Zealand. 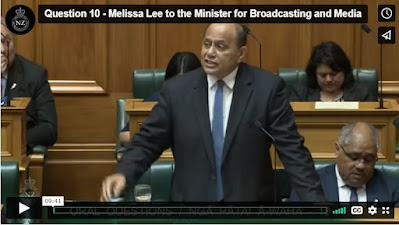 Click to view video
We should be in no doubt about what this merger is about. It is about control, and Willie Jackson said as much.

Melissa Lee: Is he aware that the combined net worth of TVNZ and Radio New Zealand (RNZ) is less than the $370 million he will spend merging the two entities into Aotearoa New Zealand Public Media (ANZPM); if so, can he explain how spending more to merge those entities than what they are worth is a good use of taxpayers’ money during a cost of living crisis?

Hon WILLIE JACKSON: Unfortunately, that member fails to understand what the problem is. The problem is not about the budgets or the numbers; it’s about what’s happening in Aotearoa at the moment. So, yes, we understand all the numbers and the figures, but the most important thing here is that we have a changing landscape in terms of the media. We have people disappearing down rabbit holes. We need to have a trusted public media entity—that’s the absolute priority—that reflects all New Zealanders. People can’t see themselves. They can’t hear themselves. They want to see all New Zealanders and hear from all New Zealanders—Maori, Pasifika, Asian, young people. It’s not just about the dollars.

And he further clarifies that this merger is more about control, and reshaping ideology. He does that by abusing anyone with a differing opinion

Melissa Lee: Does the Minister believe his statement at the Economic Development, Science and Innovation Committee—and I quote him: “We need them to change their attitude. We need them to understand what we want.” is exactly the sort of interference that submitters have raised concerns about—that the editorial independence guaranteed by the bill is illusionary?

Hon WILLIE JACKSON: That’s a sad statement from the member. I absolutely stand by that comment at the select committee, and what we require is a cultural change. Of course, that’s very hard because 99 percent of the Opposition haven’t got any culture, so they don’t understand what we’re talking about. We’re trying to bring together a commercial entity and a non-commercial entity, and it’s not just about the dollars, dollars, dollars, which is all about what the National Party is saying. The member has chosen to interpret my response to the select committee in a very strange, ugly, and unique way. So I’ll be much clearer to her: I’m working really collaboratively with TVNZ at the moment. I have a great relationship with its chief executive, Simon Power, whose only weakness was that he joined the National Party earlier in his life. TVNZ currently has a commercial focus while the new entity will focus on public media, which will require a shift in terms of their view. Why? Because it’s not just about the dollars, dollars, dollars. It’s about the people. It’s about hearing ourselves. It’s about seeing ourselves. We don’t just want to look at what the National Party has put up. This is about seeing the new Aotearoa, the new New Zealand that the Leader of the Opposition wouldn’t have a clue about.

That’d be the new Aotearoa where democracy has changed, in line with Willie Jackson’s wishes, where Maori have a privileged, and protected, position in the “new democracy”, where 15% of the population controls 50% of everything, based entirely on who their ancestors were. That is racist. That is apartheid. It is not democracy.
But in order to force that on us all, Willie Jackson and the Labour Party need to control the media totally. This is why they’ve bribed the media, bought the editorial positions of private media companies, and are now merging RNZ and TVNZ at a staggering cost to effectively create a New Zealand version of Pravda or Central Television of the USSR.

Naisi Chen: Mr Speaker. How will New Zealand audiences benefit from the creation of the new public media entity?

Hon WILLIE JACKSON: What a wonderful question. [Interruption—if I could just have a second here. Providing public media services is the prime objective of Aotearoa New Zealand Public Media. This isn’t just about entertainment, as the National Party would have it. Public media is also about news—independent, quality journalism—and for New Zealanders, they need entities they can trust. Our culture will be better reflected, with more accessible content and entertainment, and all New Zealanders—all New Zealanders—will be represented. Our democracy will be better supported through people being able to find trusted news and information and being better informed, and our public media system will be fairer, with a wide range of New Zealanders, including young people, having access to relevant content.

Approved content I think he means. Approved by the Politburo of Labour will be the reality.
Willie Jackson is a shameless racist. This is all about the control and manipulation of all media. Private media have prostituted themselves for just $55 million. Now the Government is going to further cement their control over media by wastefully spending $370 million on a merger of two companies whose combined value is less than the cost of the merger…and the Minister doesn’t care about the cost.
He does care about what the merger will mean, and that is an increase in editorial control over media in New Zealand. This Government have clearly decided that 1984 wasn’t a cautionary tale by George Orwell, it is for them a manifesto and a blueprint for increasing control over the people.
Tell me how New Zealand is any different from Orwell’s characterisation of the totalitarian superstate Oceania, ruled by the Party, who employ the Thought Police to persecute individuality and independent thinking? Where Big Brother, the dictatorial leader of Oceania, is actually Big Sister who enjoys an intense cult of personality, manufactured by the Party’s excessive brainwashing techniques?
With the co-governance separatist agenda this Government is pushing, they need to have the media under control. That’s why they instituted the Public Interest Journalism Fund that gave $55 million to those media organisations that signed up to a modern, Labour Party-approved definition of what the treaty means.
That’s why they are grabbing total control of state media.
Sadly, where we are heading is increasingly looking more like Orwell’s Oceania, than the New Zealand we all grew up in. When governments start down the separatist and racist path it usually ends in tears or blood. While you tend to vote in fascism or communism, unfortunately in every single instance of both of those similar ideologies it has required the citizens to fight their way out of it.
Cam Slater is a New Zealand-based blogger, best known for his role in Dirty Politics and publishing the Whale Oil Beef Hooked blog, which operated from 2005 until it closed in 2019. This article was first published HERE


To imply the hundreds of thousands of mature intelligent thoughtful listeners to RNZ with its wide ranging coverage are down some rabbit hole is ludicrous. If anyone is down a rabbit hole it is Wily Willie down the maori hole. I have long given up on TVNZ (except for Country Calendar and Duke documentaries) so care little what they do with it. But a disproportionate part of the $300 million is mine. RNZ striving to become all things to everyone and no one and with maori twaddle even more relentless than now will hugely reduce listener numbers, and certainly the quality of. As a blatant showcase for colonist descended energy and ability, regard for the country, and model home life, Country Calendar must be firmly in the sights for elimination.
Willie's utterances are alarming. But the msm does not pick up on. They are unlikely to go through the submissions on the ANZPMBill. And as many would be not pro maori cannot qualify for PIJFunding.
Curiously on a recent RNZ interview wW conceded few of his associates listen to RNZ. And that despite the relentless pro maori attitude and twaddle. When the channel is destroyed will more maori listen (tearing themselves away from expensively funded maori radio)?
(The ANZPMBill is a short, relatively easy, but frightening read)

I agree. Willie Jackson is a shameless racist. I have no respect for his intellect or his ethical capacity. What I find so hard to understand is the position of other members of the Labour Government - both Maori and Pakeha - who do appear to have more sense. I think they actually deserve more opprobrium for falling down in front of Mahuta and Jackson and letting this farce unfold.

" it usually ends in tears or blood. "
If either of these are the outcome, then so be it.
Perhaps to sooner the better.

I'd love to see a public opinion poll on the media with questions like:-

It may give Willy pause for thought, that he's wasting a shitload of OUR money on a couple of companies that many Kiwis don't care about anymore.

$370 million. It trips off the tongue so easily, like so many of the huge numbers announced in the last five years by Liebour. Not once have I ever seen even the simplest of budget breakdowns for these numbers, identifying how the money will be spent, nor any accounting afterwards confirming how it was spent. Exactly what is needed to be done that requires such huge expense?
I was rebuked on Facebook recently by someone saying that stating that I had never seen something over a period of years was a “poor debating technique”. I simply state it as an observation by a reasonably well-informed citizen. If anyone can point me toward any data that I have missed, I would welcome it.

Hi DeeM
I think you may underestimate how many listen to RNZ. Numbers are in any case not everything. There is quality of audience. Present statistics are misleading. Do not distinguish those with the radio playing as background and those listening attentively much of the time (when fathomable and not laced with te lingo, or reduced to propoganda by blatant pro maori bias)

Thus is just another payout to media, in poor disguise, on top of the $55 million to keep the gaslighting going, to a media I'm hearing fewer and fewer even have interest in.

I gave up watching, listening and reading TVNZ, RNZ, Stuff and The Herald 2 years ago. You could see where it was all going with the bias Pubic Media Fund and now to cement it in to a government mouth piece with the 368 million merger to "NZ Pravda" I think Willie Jackson has a vested interest as media minister dont you ??. if you watch ,listen or read this NZ Pravda media then you will become influenced and brainwashed, that's the whole point behind it.