In the UK Labour MP Rupa Huq has been forced to apologise to Kwasi Kwarteng after being suspended from the party for describing him as “superficially” black during a fringe meeting at a conference. Meanwhile, in New Zealand, the deputy leader of the Labour Party, Kelvin Davis, has used his own casual racism to abuse a Maori MP who was asking him a legitimate question in the house. When will Labour withdraw the whip from Kelvin Davis? 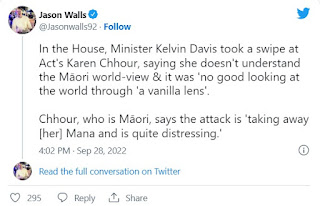 The transcript from Hansard is damning:

Karen Chhour: So does the Minister agree with John Tamihere when he says his charity and Oranga Tamariki are in a partnership and not a contract, and if Te Whanau o Waipareira is struck off the Charities Register, will the Minister guarantee that this partnership will end?

Hon KELVIN DAVIS: What the member needs to do is cross the bridge that is Te Tiriti o Waitangi from her pakeha world into the Maori world and understand exactly how the Maori world operates. It’s no good looking at the world from a vanilla lens.

David Seymour: Point of order. The question is how the Government would respond if an event happened that, I think, would bring the contract into question. Now, unless, somehow, it’s addressing the question to attack the member and her world view, then the question has not been addressed at all. 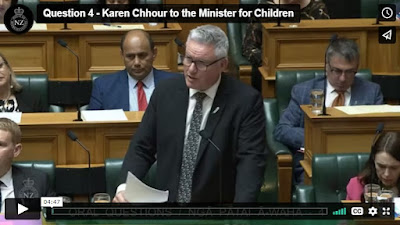 Karen Chhour is Maori, is learning of her whakapapa, and a senior Minister just heaps racist abuse on her for daring to be the wrong sort of Maori.

Kelvin Davis has previously complained about politicians “denigrating his whakapapa”, but happily uses whakapapa as an excuse for his shabby racist behaviour in the house. His eagerness to play the race card at every opportunity has now denigrated another Maori person’s whakapapa.

The issue that Chhour was raising was a legitimate issue as John Tamihere‘s charity is under investigation after financial reports showed nearly $500,000 in charitable funds had been used to bankroll his mayoral and general election campaigns. Te Whanau o Waipareira Trust Group has just yesterday signed a partnership agreement with Oranga Tamariki. Kelvin Davis uses his casual racism to ignore those issues and to attack Karen Chhour.

Davis is essentially saying that there is a Maori way, and that is different from the way everyone else is held to account, and by the way, you are the wrong sort of Maori, so you can just shut up.

No doubt all this casual racism from the likes of Willie Jackson and Kelvin Davis will be ignored or worse, justified.

At the very least we can all now understand just how racist the Labour Party has become under Jacinda Ardern. So much for her trademark kindness.
Cam Slater is a New Zealand-based blogger, best known for his role in Dirty Politics and publishing the Whale Oil Beef Hooked blog, which operated from 2005 until it closed in 2019. This article was first published HERE

One day the greater New Zealand Public will realize that Davis & Co. are at war with the New Zealand people. Some may realize that this isn't being replied to in - kind, leaving these Part Maori Radicals to freely espouse, disseminate & pontificate their undisguised hatred for "Whitey" and New Zealand Society in general. Lex talionis. Enough is enough.

Well Kelvin Davis said it - the rest of us only dare to think it - it seems there is a Maori way, which has a wholly different spin on concepts the rest of us can grasp such as nepotism, honesty, rational thought, reciprocity - I could go on.
There may be a saying in te reo for 'the end justifies the means'.

Dammit I'll be dead in 30 years when people might have the sense to look back on this stupid racist period in the history of the country and see it for the pathetic non-issue of the debate - well I dearly hope they get more sense.

Why was nothing done about kelvin Davis' racist remarks.
A similar statement from a non Maori about European business practices, would cause an ejection from the house